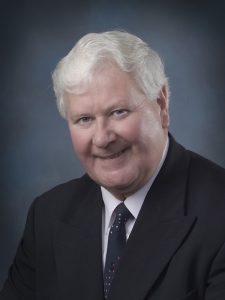 Sir Chay Blyth is known to many as the first person to sail non-stop, “the wrong way” round the world.

Chay Blyth was born in Hawick the youngest of seven children, two brothers and five sisters. It was very much a blue collar family and they lived in a council house in the west end of Hawick, this was an area that set themselves apart and had the nickname of ‘Guitterblood’ or ‘Westender’

Sir Chay Blyth was born in Hawick in Scotland on 14 May 1940, the youngest of a family of five girls and two boys. At the age of 15, he left school and went to work for a local knitwear factory as an apprentice frame worker. This career was short-lived as, aged 18, he signed up for The Parachute Regiment where he rose quickly through the ranks, becoming sergeant at the age of 21 – the regiment’s youngest ever Sergeant at that time.

In 1966, Blyth teamed up with Captain John Ridgeway to row across the Atlantic from Cape Cod to the Aran Islands in a 20ft dory. They completed this in 92 days. As a result, he was awarded the British Empire Medal and voted Man of the Year.

In 1971, having left the Army three years previously, aboard the 59ft ketch British Steel, he became the first person to sail non-stop westwards around the world against the prevailing winds and currents. In recognition of this, he was awarded the CBE and was voted Yachtsman of the Year and again Man of the Year.

Since that year, he has accumulated a staggering list of racing successes: 1973/4: skippered Great Britain II in the first Whitbread Round the World Yacht Race with a crew from the Parachute Regiment. They won the elapsed time prize and nine out of the 12 trophies. 1978: won the Two-handed Round Britain race with Rob James in Great Britain IV; 1981: won the Two-handed Transatlantic race with Rob James in Brittany Ferries, breaking the record; 1982: 2nd overall in Round Britain Race; 1984: capsized in Beefeater II off Cape Horn and spent 19 hours in the water before being rescued; 1985: rescued in the Atlantic from Virgin Atlantic Challenger, which sank; 1986: co-skippered with Richard Branson the successful Blue Riband transatlantic attempt on Virgin Atlantic Challenger.

In 1989, Sir Chay founded Challenge Business, a market leader in creating, managing and promoting World Class events. Prior to founding the Challenge Business, Sir Chay worked for Hill & Knowlton for 10 ten years and Benson & Hedges (Silk Cut) for a number of years. Sir Chay was Chairman of the Silk Cut Nautical Awards, an Awards programme that lasted 10 years.

In 1997, Sir Chay was Knighted for his services to sailing.