The Saga of Ken The Horse

Ken the Horse was written by Sheila Campbell, MBE (nee Macdougall) who currently resides in Eckford near Kelso.  Sheila is a Souter who spent her formative years in the Ettrick Valley returning to Selkirk aged 8.  She writes stories in rhyme mainly recounting events affecting her family, friends, acquaintances and the wider community.  Her stories are mainly written and performed in the Border Scots dialect.

Several of Sheila’s stories in rhyme have been published and she has performed some of them locally, nationally and internationally as well as on TV and Radio.

‘Ken the Horse’ was written in 2003 as a direct result of the articles in the Southern Reporter and Hawick News reflecting the community concerns of Hawick residents when their 1514 Commemorative Statue needed to be moved.  The strength of feeling on this subject caught her imagination and she felt compelled to write about it.  Further verses were added in February 2004 to illustrate what happened immediately after Ken had been safely relocated.

Sheila said “Ken the Horse is a favourite locally (particularly with Teries). When I have performed it to non Border audiences I generally give a brief explanation of the context and some of the words to help the listener appreciate the meaning and the dialect.  I suggest that you read it aloud to better appreciate the story.  I’d like to wish the Cornet and his followers ‘Safe Oot and Safe in on their big day.”

The Saga of Ken The Horse

Now there is a famous monument, a 27 ton statue of a steed 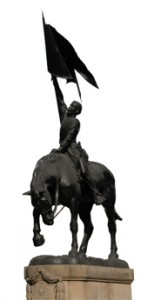 A right weel kent landmerk, at the hairt o’ the Teri breed.
Now you might no hev kent this, bit that horse’s name is Ken
And the reason that ah ken this, comes right back doon tae them.

If yer no share where yer gaun in Hawick, and ye seem tae be off course,
Jist ask a Teri hei’ll pit ee straight and hei’ll stert wi – “Ken the Horse?”
The Teries hev hed their troubles and they like tae hev their say
Bit what a stir the Cooncil caused tryin’ tae get the High street tae gaun yin way.

Now why de ye suppose they did this? Cos oh Ken – hei’s the reason why
Hei was causin congestion – the traffic hed bother gettin’ bye.
Hawick’s centre was awfy busy, wi lorries, cars and aa sorts passin through
They hed tae make things better, bit it caused a right taedo.

The Teries were in a turmoil. No! ee cannae move oor horse!
Ee could dae’d eternal damage, heis oor history, oor heritage, a tragedy could be caused.
Cooncillor Pitterson got himsell het up, his authority rushed tae his heid
‘There’s only yin wey they’ll move oor horse – that’s if ma body – it were deid!’

Hamish Smith and Landles, felt Ken’s life was now at stake,
Hei must be entitled tae ‘Memorial Rights’; Oh what if hei should break!”
Then came the fateful day, ‘Ken the Horse’ hei hed tae shift
Surprisin’ treasures were fund beneath as the bricks began tae lift.

A Hawick News page frae 1914, a Common Ridin sang book that cost a penny,
Business cairds, unsmoked fags, wormin cake, and wud ye believe a bairn’s dummy.
Bit amangst the stash – how teeth did nash, the Pailmerks hed slipped unseen
A membership caird for the Gala Harriers, hei must hev been awfy keen.

Worse was yet tae come – Teries stood – aghast at the awesome sight
The liftin gear wusnae big enough, Ken was in an awfy plight
His lugs and tail could be lobbed right off, bi that callous ill-fittin’ cage
Bringin Teri fears right tae a heid, in a mammoth blindin rage.

Yince oor Ken is settled – the Teries wull need anither cause tae fight
So what aboot the railway? That should keep them gaun aa right..
Well that was Davie’s meetin – the yin that distracted him that day.
Lets hope they deh hev tae move the horse – if the trains should gaun their way.

It is a mitter o civic pride
Hei’s famed way beyond bonnie Teviotside
Hei’s been filmed in transit shall oo say,
Hei might pick up an Oscar or twae
So hei’ll hev tae be aa bright and neat
Although hei wull be athoot hei’s seat.